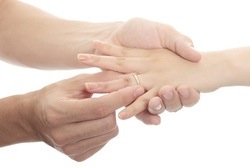 “But seek first His kingdom and His righteousness, and all these things will be added to you” (Matt 6:33).

This article is not an attempt to place any guilt trips on those already married. I understand the delicate situation. Yet I think that we sometimes are afraid to tackle the question, and I beg your careful consideration of the question: Should a Christian marry a non-Christian?

What sets the child of God apart from the world, in action, is seeking first the kingdom of God (i.e., God’s rule, doing His will) and His righteousness. My question, when it comes to marriage, is this: should a Christian, who is to be seeking God’s rule first, join himself or herself to one in marriage, who is not seeking God’s rule first? Is this even compatible — seeking first God’s rule while joining myself in the most intimate of ways to one who is going the opposite direction? I’ve never been satisfied with a “yes” answer to that question (maybe you can be satisfied with it, but I have yet to figure out how that works).

The problem is that a non-Christian has refused to submit himself to God’s rule, and this can spell trouble. Why? Because, it indicates that one is taking self over God. One of the most fundamental aspects of being a Christian is that of self-denial (Luke 9:23). But a non-Christian has refused this, which means that he has set a pattern of self-will for himself. There was a reason God told His covenant people under the Law of Moses not to intermarry with pagans. He knew their hearts would be led away if they did (see Deut 7:3-4). Shall this principle be ignored now? Do we find the danger of having our hearts turned away from God lessened today?

This is particularly problematic for the woman who marries a man who is not a Christian for the simple reason that marriage is a reflection of Christ and the church (Eph 5). The man is to love his wife as Christ loved the church. This is difficult enough for one dedicated to the Lord. For one not dedicated to the Lord, he may show love, but he will not purposefully pattern his love after Christ. Is this what we want?

The Christian’s commitment is to please God in all things and to pursue holiness. Why wouldn’t it be that way in marriage, too? Therefore, the fundamental question to be asking is this: will this person help me serve the Lord and prepare myself for eternal life with God? I advise ladies to answer the question, “Will you marry me?” with “Only if you’ll help me serve God and go to heaven.” This puts the responsibility back onto the man to be the leader he is called to be, first and foremost in leading his family in the way of God. It seems axiomatic, does it not, that a non-Christian will be unable to do this since he has not committed himself to God’s rule above all else.

“Are you saying that being married to a non-Christian is a sin?” No, and I am fully aware of the teaching in 1 Corinthians 7 on this. If you are married to a non-Christian, then you really are married and need to live out your commitment. Here I’m not really talking so much about already being married as much as I am talking about getting married. In other words, if you are already married, then you need to be dedicated to that marriage, no matter how difficult it may be or who you chose. The questions I am asking have to do with the attitude of one who is looking to get married, before the “I do’s” have been said. How careful are we being about the kind of spouse we choose?

I also recognize that some are married to one who has since quit the Lord. That is, both were Christians at the time of courting and marrying, but now one has given up on the Lord. Again, the Lord has joined them together and the Christians must remain dedicated to making that work. 1 Peter 3:1-6 would certainly apply to both sets of circumstances.

I am also fully aware that many have been converted to Christ after getting married. Praise the Lord for that! However, that still does not really address the fundamental point here. We cannot marry with the expectation of being able to convert a spouse, as if marrying a non-Christian is a form of evangelism (I’ve had that argument put to me before). Though there are many examples of post-marriage conversions, there are many others that have not seen such a pleasant outcome. Are we willing to risk it, and why?

Then, there are the children. All children are precious and need proper care in growing and learning. The Christian’s task is to raise up a child in the discipline and instruction of the Lord (Eph 6:4). The non-Christian does not have the same goals for children, and this creates a divide in training children. Even if the non-Christian agrees to let the Christian teach the children, the influence of both parents will be strong and divisive. Yes, some have been successful in spite of the circumstances, and I would praise those parents who have been able to do it, but do we want to enter the situation with such a risk in the first place? There are enough difficulties in raising children, given a culture that is antagonistic toward God and His people. Why would we willingly compound the difficulties?

The Christian considering marrying a non-Christian needs to take a long, hard look at this. The problem is, once a person has fallen in love, many of those problems will likely be overlooked. My plea, even more, is to single Christians who are not dating anyone yet. Decide now that the person you will marry will be truly devoted to the Lord and in helping you in your spiritual journey toward God and eternal life with Him.